The rainbow eucalyptus gets its name from its colorful appearance. It is a tall tree and the only eucalyptus to live in the rainforest. It grows in the Philippines, New Guinea, and Indonesia where it thrives in tropical forests that get a lot of rain.

The most outstanding feature of a rainbow eucalyptus tree is its bark. The rainbow effect is created as the bark peels off throughout each season, revealing the fresh, bright-green bark below.
As each layer of bark matures, it turns shades of blue, purple, orange, and red. When this incredible tree sheds its bark, it almost looks like a colored pencil being sharpened.

According to Professor David Lee, a botany professor at Florida International University, the trunk produces a succession of thin, smooth barks. Each layer of bark is covered by a thin, transparent layer of cells which allows us to see the chlorophyll stored in the cells underneath. Chlorophyll is the green pigment that traps the light energy used in photosynthesis.

As the surface of the trunk ages, the transparent cells on the top of the outermost bark layer become filled with pigments called tannins. Tannins may be yellow, brown, or red in colour, depending on the type. The combination of different amounts and kinds of tannins and a reduction in the amount of the underlying chlorophyll may be responsible for the varying colours seen on the trunk of the rainbow eucalyptus. 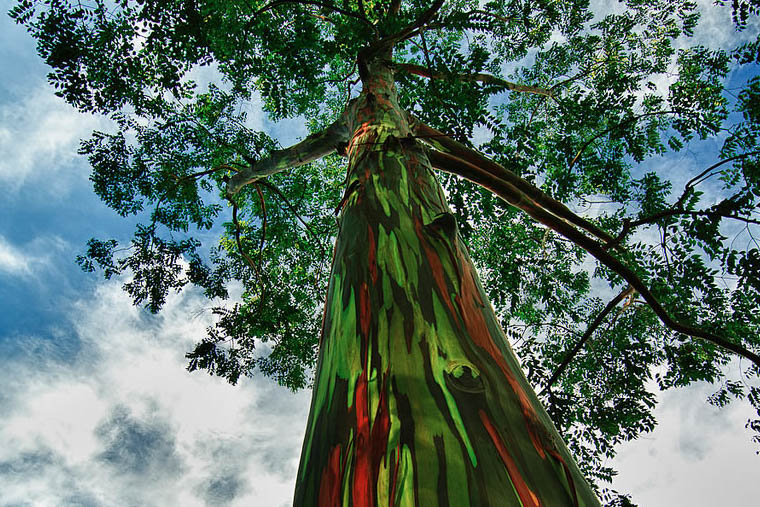